FacebookLinkedinYoutube
ConcreteVA.com in Richmond Virginia. Call for a FREE quote: 804-338-0474 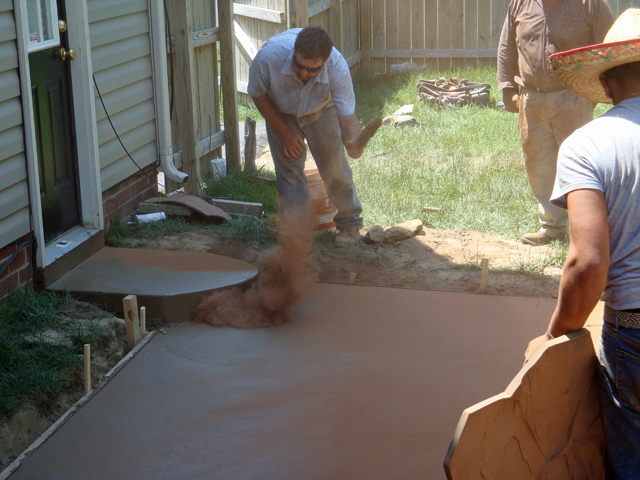 Oh, It’s all glamour and glitz! Yea, give me a break. Well take a look. That brown dust you see happens on virtually every stamp job we do. The only difference you might see from one job to the next is the color of the dust. By the way, this dust has a name it’s called release. The release is a requirement for stamped concrete. For example whenever you see stamped concrete it has various colors to it.  Release is one of the colors you see. For the coloring aspect of the stamped concrete the release gives you shading effects, highlights and also color in the crevices where you push your stamp in the concrete. Take this picture for example, see the stamp being held in the lower right corner. This stamp is designed to look like stone that is “mortared” in. Those lines you see in the stamp will be pressed down into the concrete after the release has been applied. The release will stay in the crevices created by pushing the mat down into the concrete . In this case the release being brown will stay in all of those joints between the stones. Tomorrow when we remove the release from the concrete the release will stay put where I want it to, giving me the effects I am looking for. Release also works like its name implies. It allows us to push the stamps into the concrete and lets the stamps “release” without having concrete stick to them. I always explain like this, the release acts like the flour does when you are rolling out pastry.